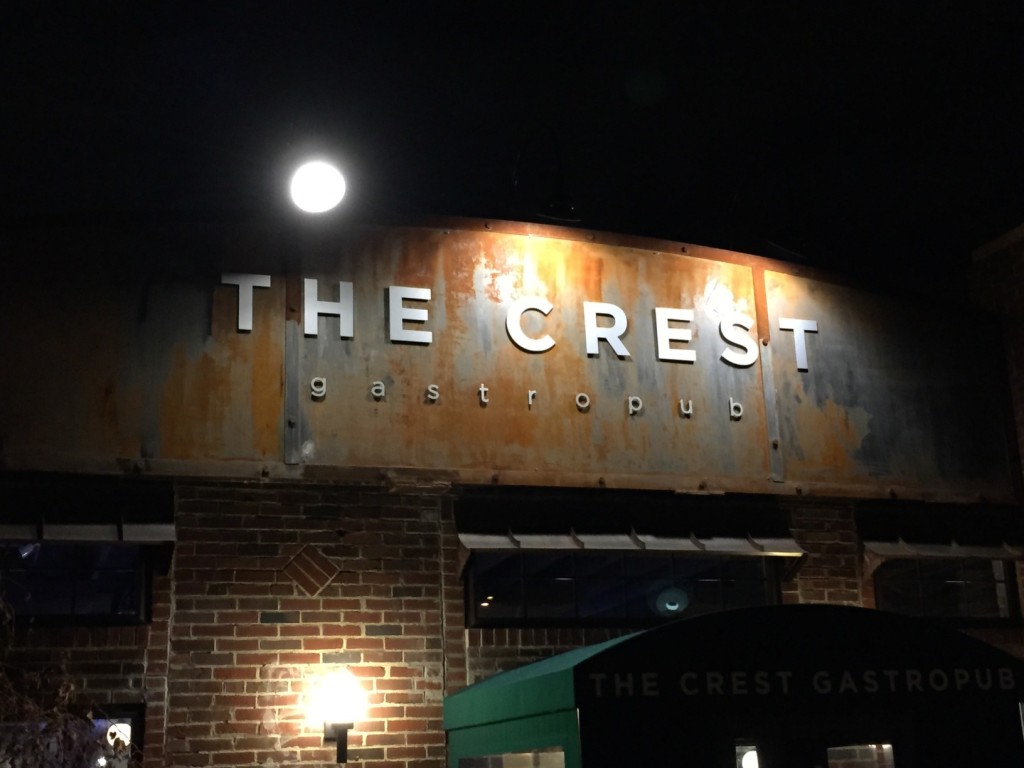 The Crest is a restaurant that perfectly epitomizes sustainable, local food. In fact, a good portion of the items used in their dishes are grown on-site, either on the building’s rooftop garden, or in the wooden planters that line the patio area. Many of the restaurant’s condiments and sauces are made from scratch too, such as the hot sauce found right on your tabletop. If Crest doesn’t make it in-house, then the ingredient is often locally sourced.

Let’s start with cheese. Crest has one of the best cheese-centric dishes in town: Honey-glazed Goat Cheese Balls. These one-bite wonders consist of a lightly-battered nugget of goat cheese, drizzled with honey and sprinkled with almonds for crunch. The whole thing is then placed on a teeny piece of toast with a toothpick, allowing you to get it to your mouth as quickly as possible. The ever-changing charcuterie platter is also noteworthy, as is the Mediterranean plate, filled with baba ganoush, olives, hummus, and pita. Order the Hot Pastrami Melt in order to try the killer chili garlic aioli, or just ask for a side of aioli for dipping your fries – it’s so much better than ketchup! It’s really hard for me to resist anything BBQ, and the Pulled Pork Sliders topped with cheddar, onions, and Brothers Drake BBQ sauce don’t disappoint. 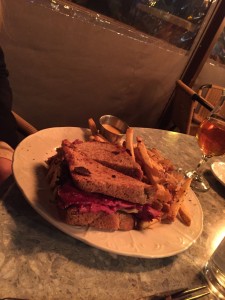 Those with dietary restrictions will enjoy the clearly labeled menu items that denote vegan, vegetarian, and gluten-free items. So many places tout a salad of some kind as their sole vegetarian option, but The Crest’s selections are not lacking in flavor or originality. The Wood-fired Brie with mushrooms and walnuts and the bean-heavy Shagbark Chili make it so you don’t even notice the lack of meat.

The Crest’s beer list is one of the best in the city too. They make regular updates to their online beer list at beermenus.com, so you can check ahead of time to see what draft tickles your fancy. Even better, the happy hour deals are amazing, and drafts are 1/2 off after 2 pm on Sundays as well. On the cocktail front, Crest makes their own Bloody Mary mix as well as a number of housemade syrups. Try the Hello Sunshine, a marriage of Watershed Distillery Bourbon and coriander-honey syrup that will chase winter blues away.

Like 101 Beer Kitchen, Crest has a brunch menu that rivals their dinner menu. Another post to come!

Culinary Clue: While you’re at Crest, check out the Shaw Brothers, a band of supremely talented siblings that play almost every Sunday around 8:30 or 9. They play a great mix of original and popular music.