If you follow this blog at all, you probably know about my admiration for the Cameron Mitchell family of restaurants. I love the patio at The Barn, can’t get enough of the chocolate cake at Cap City, and dream about the sushi at Hudson 29 constantly.  This month, Cameron Mitchell Restaurants is celebrating its 25th anniversary! There’s no better way to say thank you to this Columbus dining trailblazer than by visiting their latest concept, Harvey & Ed’s, and writing about my experience.

Named for the Chief Operating Officer’s father and uncle, Harvey & Ed’s opened this past June in the Short North. The new spot provides a fusion of Jewish deli fare with classic CMR touches: flawless service, creative cocktails, and an upscale atmosphere; it’s a type of cuisine that can’t be found elsewhere in the city. I love Katzinger’s for a traditional deli sammie, but this is a great alternative when you’re looking for something different. 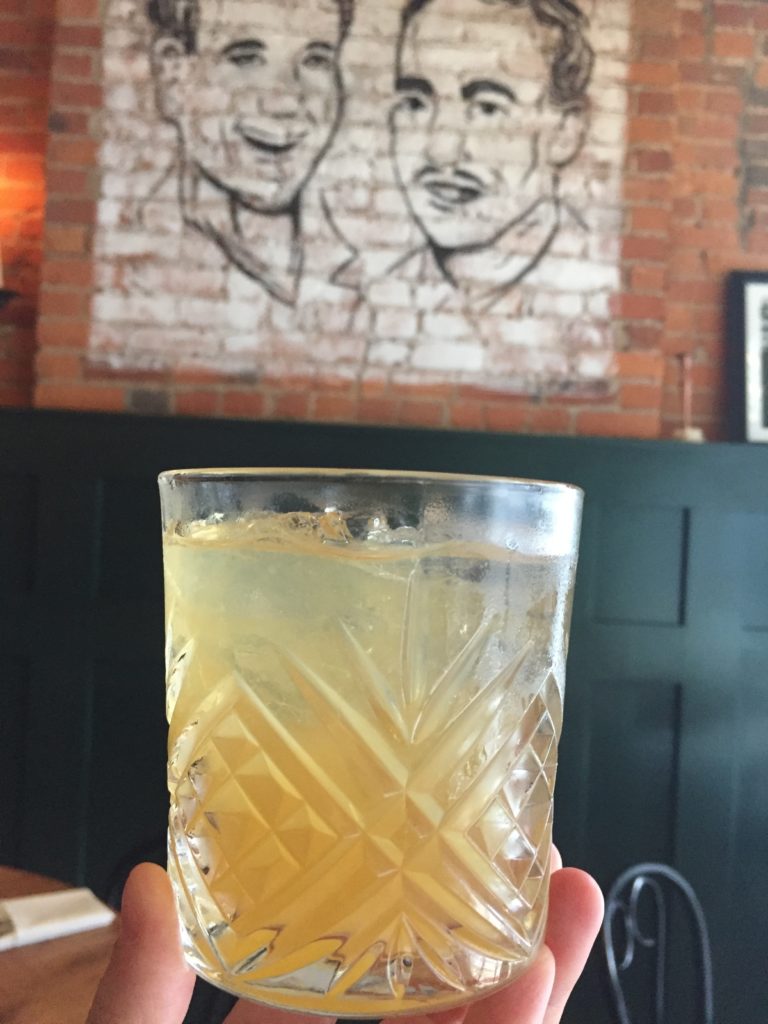 Start with a beverage, spiked or simple, because there are a plethora of options. The blackberry house-made soda was colorful and refreshing, or go traditional with a chocolate egg cream. If you’re leery about raw eggs, please note that despite the name, egg creams are just chocolate milk and seltzer. They’re a frothy and tasty sweet treat served in a miniature milk jug. The Boozy Egg Cream version is a scrumptious sipper too, with the addition of tequila and chili liqueur to the original (it sounds odd but trust me on this).  I enjoyed the Real Mensch too, a concoction sure to cure your winter cold – it’s scotch, lemon, and honey on the rocks. While enjoying your drinks, be sure to nibble on the Hot Reuben Dip, a cheesy delight served with a rainbow of bagel chips made with thinly sliced Block’s Bagels. The matzo ball soup is comfort food at its best, and many of the “noshes” feature favorites with a twist. A few examples: massive latkes with caviar, salmon, and green apple; Brussels sprouts with goat cheese, pumpernickel, and mustard vinaigrette; fried stuffed olives with lamb and cucumber yogurt. 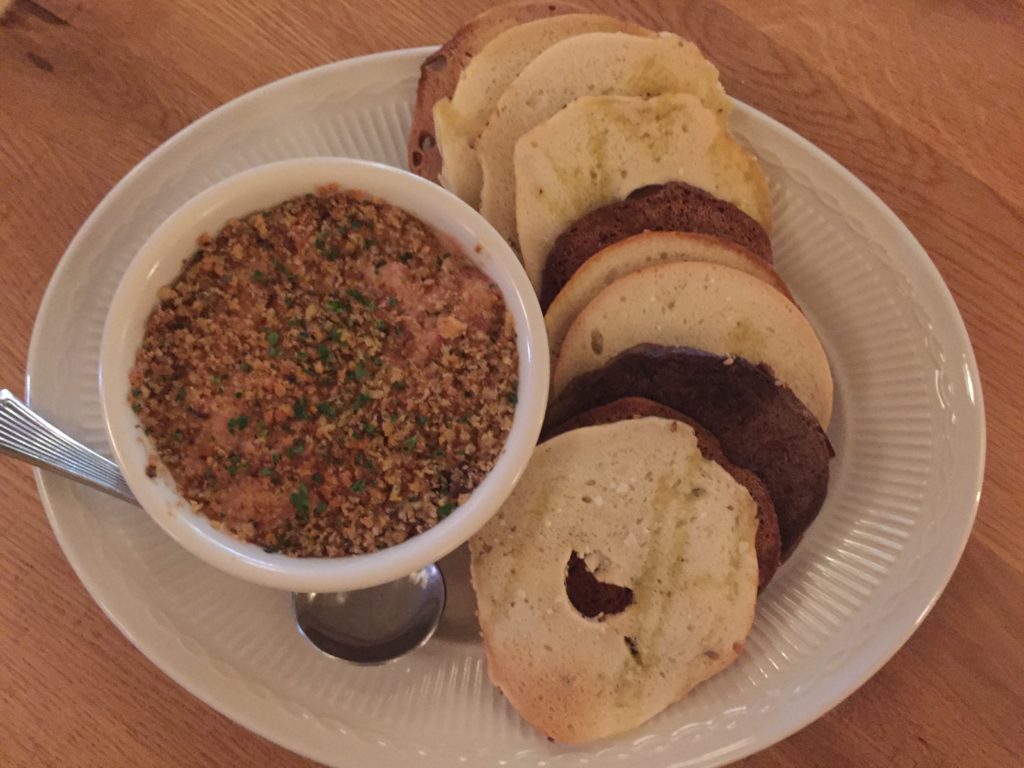 For mains, you can go casual or select from fancier entrees. I opted for a lighter dish after all those bagel chips and added salmon to the Grain Salad; it was excellent. I enjoyed the blend of flavors and textures from the wheat berry, kale, quinoa, apple, almonds, figs, and feta, plus the spicy honey dressing. Looking for something between bread? Choose the Reuben, Hot Corned Beef, or a Falafel Hoagie (there’s also more choices) and pair them with potato salad, coleslaw, or fries, as well as the mandatory pickle. For more composed dishes, the menu sports selections like Roasted Chicken Tabbouleh, Halibut with raisins and chili relish, and Pomegranate Braised Lamb alongside chickpeas and radish citrus salad. 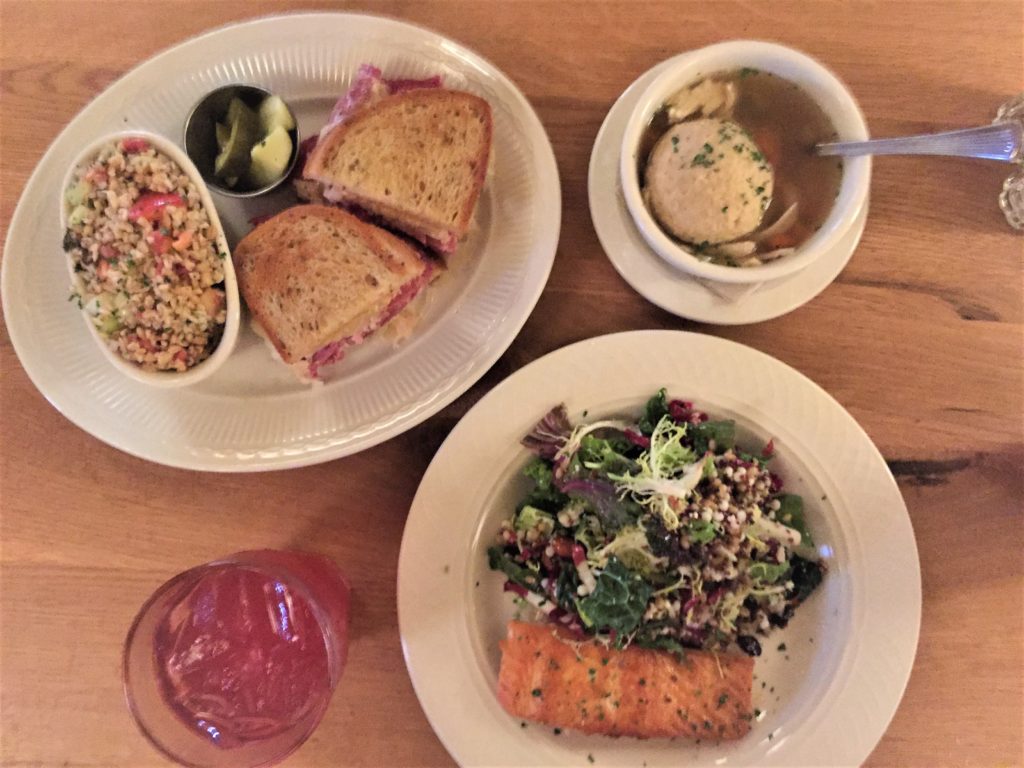 Save room for a black and white cookie for dessert, or the Chocolate Babka. Harvey & Ed’s babka dessert consists of a bread dough rolled into a spiral with chocolate pieces, then sliced and prepared into French Toast. The result is a gooey, melty chocolate confection crowned with whipped cream and berries. I’ll have to make a return for brunch too; the menu’s Pastrami Hash and Knish Quiche are calling my name, but I also could use an excuse to eat that Babka again.

Culinary Clue: Harvey & Ed’s was one of this year’s Bucket List restaurants. Check out the full post for the entire list of new and old establishments that I’m making sure to sample in 2018.

Shoot me a message over on Instagram and let me know your favorite dish at Harvey & Ed’s if you’ve visited!

Disclosure: I received a complimentary meal from Harvey & Ed’s. All opinions in this review are my own, as was the decision to write this post.